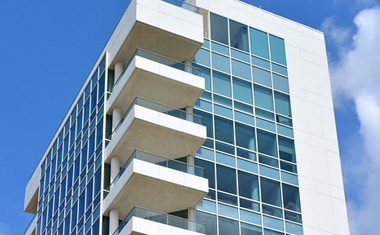 Eddy’s system was installed on the main feed, temporary lines, and in the hoist suites of a ten-floor luxury condominium project in Maple. Eddy’s Intelligent Leak Protection system was in place during construction and continued post-occupancy. As occupancy approached, Eddy’s protection extended to the entire building, including in-suite, in common areas and amenities such as the pool equipment room, on the zones and main feed, as well as the mechanical penthouse.

The deployment consisted of the following equipment:

Less than a month after the installation of our full system, a major issue was identified. Due to a pressure relief valve failure shortly after installation, water began leaking into the mechanical penthouse at a rate of 80 liters/minute. Eddy’s H2O sensors immediately alerted and within 30 seconds, the water makeup for the heating system was closed off. The Construction Supervisor and Security were immediately notified, and upon investigation, diagnosed the issue as a pressure relief valve that was stuck in the open position. By reducing the pressure in the system and closing off the water makeup, the pressure reducing valve had then closed.

Without Eddy, the outcome would have been catastrophic and would have resulted in a significant loss for the property owners in terms of money and water.

In one major incident Eddy’s H2O sensor alerted the presence of water in the heating and cooling area of the mechanical penthouse. Upon investigation, it was discovered that the second boiler had several leaking pipes and water had begun to collect on the floor immediately behind the boiler. While no action was required in terms of water shutoff, this event provided necessary information and insight for maintenance to avert future water loss issues relating directly to the needed repairs of the boiler.